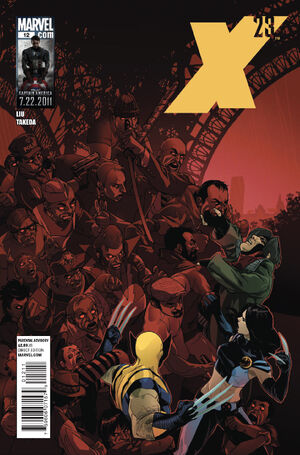 X-23 has been fighting against her past for years, and now she has an opportunity to put it to rest for good. Meanwhile, Jubilee’s past as a mutant and X-Man haunts her as she struggles to find a place in the world– but if they don’t have their pasts to keep them going, what do they have? And can they figure it out before the mysterious figure behind X-23’s kill-list gets to them first? Find out as New York Times Bestselling writer MARJORIE LIU and fan favorite artist SANA TAKEDA take you to the edge!

Retrieved from "https://heykidscomics.fandom.com/wiki/X-23_Vol_3_12?oldid=1755726"
Community content is available under CC-BY-SA unless otherwise noted.