Start a Wiki
Part of the 'Regenesis' event 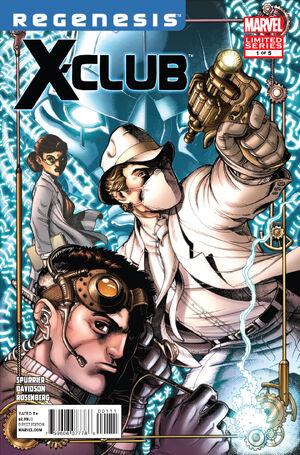 Appearing in "We Do Science (Part 1)"Edit

In the wake of SCHISM, the X-Men’s Science Team takes it upon themselves to make a gesture of goodwill on behalf of mutantkind and better the world…using SCIENCE. But just as construction of the X-Club’s state of the art space elevator nears completion, chaos erupts! And it appears to the world that mutants are to blame. Can Dr. Nemesis, Madison Jeffries, Kavita Rao and Danger clear the X-Men’s name before their experiment backfires? Don’t miss this new limited series that will surely change how you look at the X-Men and the Periodic Table of Elements FOREVER!

Retrieved from "https://heykidscomics.fandom.com/wiki/X-Club_Vol_1_1?oldid=1649357"
Community content is available under CC-BY-SA unless otherwise noted.