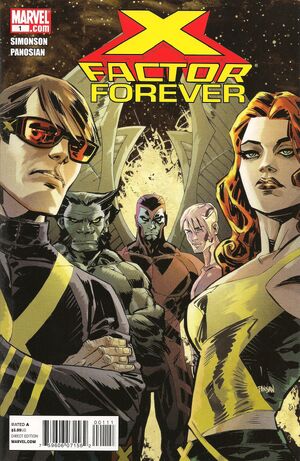 THEY'RE BACK! Once they were Xavier's young charges: mutant teens who bore the responsibility of protecting a world that hated them. But time has hardened these five X-Men, forcing them to reimagine their mission and purpose. And now, the original dream-team returns to fight the one threat that's haunted them since the day they took on the X-Factor name. Join legendary X-scribe Louise Simonson as she reunites with the title and characters she made famous for an epic in the FOREVER tradition!

Appearing in "The Apocalypse Journal"Edit

Synopsis for "The Apocalypse Journal"Edit

Retrieved from "https://heykidscomics.fandom.com/wiki/X-Factor_Forever_Vol_1_1?oldid=1468412"
Community content is available under CC-BY-SA unless otherwise noted.