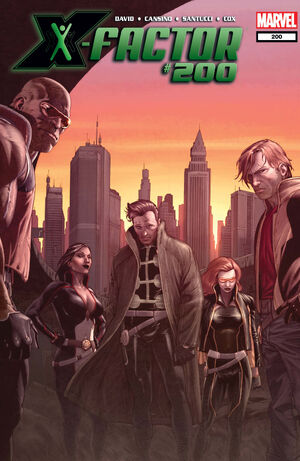 Appearing in "The Invisible Woman has Vanished! part 1"Edit

"THE INVISIBLE GIRL HAS VANISHED" X-Factor has relocated back to New York, and their first client is a keeper: Franklin Richards, whose mom has disappeared and who figures that the premiere detective agency in the Marvel Universe has the best chance of finding her. Except Reed Richards doesn't seem especially cooperative in helping them locate his missing wife. What is he hiding, and does it have anything to do with the coming Darkness? Meanwhile, Val Cooper has some bad news for Monet: Her ambassador father has been taken prisoner by terrorists, and she has less than 24 hours to find him before he winds up getting his head cut off on video.

Appearing in "Matters of faith"Edit

Synopsis for "Matters of faith"Edit

Retrieved from "https://heykidscomics.fandom.com/wiki/X-Factor_Vol_1_200?oldid=1760331"
Community content is available under CC-BY-SA unless otherwise noted.