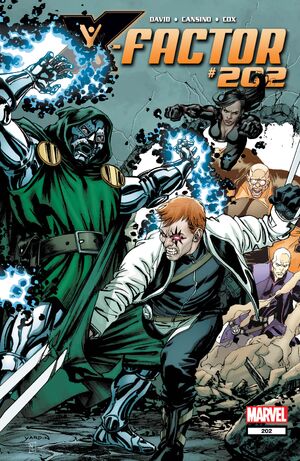 Appearing in "The Invisible Woman Has Vanished!, Part 3"Edit

It's all been building toward this: A suicidal assault on Castle Doom in the heart of Latveria as the unlikely trio of Monet, Shatterstar and the Thing go head-to-head with the guy who has his own complete country. Meanwhile, who or what exactly was buried in that lonely grave? And did Madrox arrive in time to make a difference? Plus, Franklin and Valeria Richards are on the run from the most unexpected enemy of all, and the only person who can defend them is...Strong Guy? Part 3 of "The Invisible Woman has Vanished!" Get it before it vanishes off the shelves!

Retrieved from "https://heykidscomics.fandom.com/wiki/X-Factor_Vol_1_202?oldid=1766198"
Community content is available under CC-BY-SA unless otherwise noted.