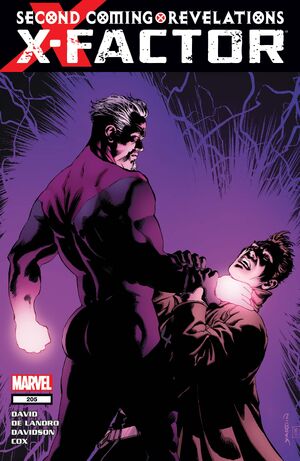 A SECOND COMING TIE-IN! The mutant hunter Bastion has sent the Mutant Response Division and the newly resurrected Bolivar Trask after X-Factor with one mission: Kill them all. And it seems thus far that all is going according to plan. Meanwhile in the jungles of South America, Strong Guy has to form an extremely unlikely alliance if he wants to save Monet from the MRD.

Retrieved from "https://heykidscomics.fandom.com/wiki/X-Factor_Vol_1_205?oldid=1759492"
Community content is available under CC-BY-SA unless otherwise noted.