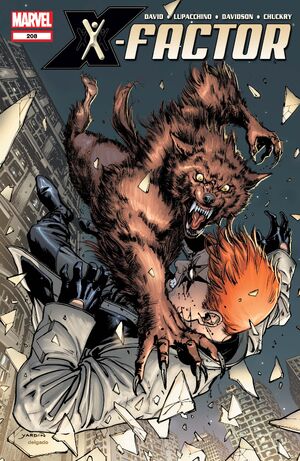 Why is that well-dressed dog attacking Shatterstar?

At X-Factor Headquarters, a still-weak Monet confronts Layla in the hall, demanding Layla explain her association with Doctor Doom. Layla gets the better of Monet in the conversation, but reveals that she and Doom were learning from each other; she was helping him avoid a disagreeable future (as well as positioning him to help the time-traveling Madrox and Layla 80 years in the future), while she was learning "stuff".

Monet reacts violently to one of Layla taunts, but Layla disables her with the technology in her Doom-tech gauntlet. Guido arrives to find Layla holding the unconscious Monet, and Layla deceives him into thinking Monet simply passed out from exhaustion while talking.

Outside, Darwin and Longshot are returning to headquarters with a couple of young ladies they had met, impressing them with tales of being superheroes. As they approach the building, Rahne and Shatterstar come crashing out a second floor window, fighting. The two young ladies run away.

Rahne accusing Shatterstar of mind-controlling Rictor, but his kept from attacking him further by the Longshot who blasts her with water from a handily-nearby fire hydrant. Rictor reaches them, and convinces Rahne that he not being mind-controlled. He asks Rahne if he's the father of her baby, and she deceives him into thinking so by saying she wasn't with anyone else seven months ago. The two hug. Rictor looks worried while, while Layla gives Rahne a knowing look behind Rictor's back.

Meanwhile, Madrox and Theresa have tracked down Pip the Troll and have taken from him an amulet that protected him from Hela's sight. He attacks them to try an get it back, but Hela soon arrives and reclaims him as her court jester, revealing to Madrox her true nature and letting him keep the necklace she hired him to find, for it was never her true prize. Feeling guilty, Madrox decides to go to Las Vegas to rescue Pip.

Retrieved from "https://heykidscomics.fandom.com/wiki/X-Factor_Vol_1_208?oldid=1468767"
Community content is available under CC-BY-SA unless otherwise noted.