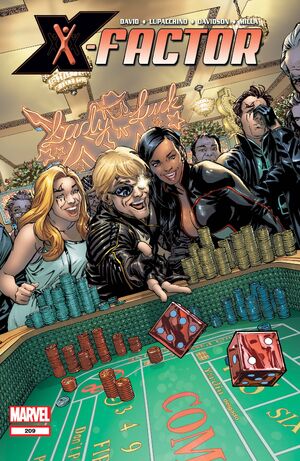 Longshot. My new best friend. ... I want you to go back into that casino and win. ... Everything.

X-Factor has come to Las Vegas in search of Hela, who is holding Pip the Troll prisoner. Unfortunately, Madrox has trouble keeping his team together, as Shatterstar has gone off the deep end with a pirate ship set and Longshot and Layla are going crazy at the casino.

Flashing back to six hours ago, Madrox has found out that Wolfsbane is pregnant and there is an issue of who the father is; theories point to Madrox, one of his dupes or Rictor. Furthermore, she does not want to talk about what happened with the X-Men.

In the present, Madrox is asking around about Hela's whereabouts. And luck has it that Dr. Jane Foster is in town for an A.M.A. conference. She warns X-Factor not to draw any attention from Hela and advises that they leave. As she walks away, she calls her friend Donald Blake to "...raise a little cane."

Figuring that they need to get noticed, Madrox entices Longshot to use his luck powers to win it big in Vegas. With all the cash building up, X-Factor considers this the best plan ever, as they rent a hotel room with great perks. However, Layla cryptically says that Shatterstar may be facing more than he bargained for. At the moment, Shattersatar and Madrox are approached by guys in viking outfits. But they aren't actors, but really live (or dead) Asgardian warriors.

Retrieved from "https://heykidscomics.fandom.com/wiki/X-Factor_Vol_1_209?oldid=1468768"
Community content is available under CC-BY-SA unless otherwise noted.