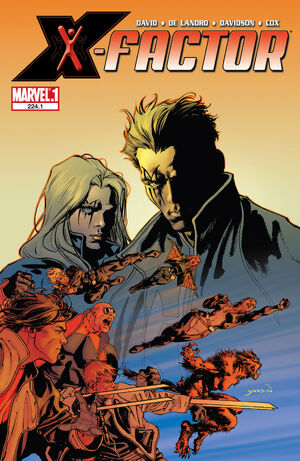 Written by PETER DAVID Penciled by VALENTINE DE LANDRO Cover by DAVID YARDIN X-Factor Investigations has been taking on stranger and stranger cases recently but when an eerie sighting leads the group to the hometown of their leader, Jamie Madrox the Multiple Man, they may have stumbled on a bigger mystery than they intended. With this new-reader friendly issue, there's never been a better time to check out the series IGN.com says 'puts most Triple-A titles to shame'!

Retrieved from "https://heykidscomics.fandom.com/wiki/X-Factor_Vol_1_224.1?oldid=1468879"
Community content is available under CC-BY-SA unless otherwise noted.