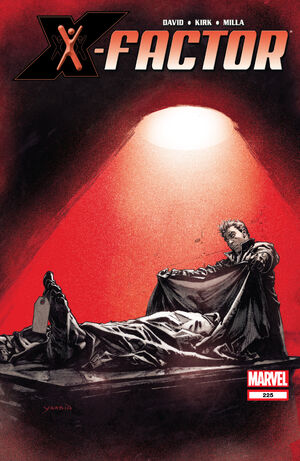 You want to know why I didn't do anything, Rahne? The real reason? Because when I do, I get punished. And sooner or later, so does everyone else.

Written by PETER DAVID Penciled by LEONARD KIRK Cover by DAVID YARDIN As the mutant detectives of X-Factor Investigations work to uncover other people's secrets, they're keeping some of their own...secrets that could eventually tear the team apart. Well, unless a recently deceased friend rises from the slab and tears them apart first!

Retrieved from "https://heykidscomics.fandom.com/wiki/X-Factor_Vol_1_225?oldid=1518370"
Community content is available under CC-BY-SA unless otherwise noted.