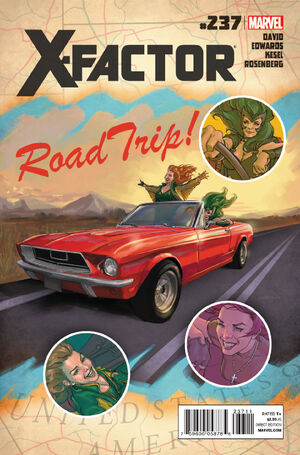 Beat yourself with it, Rahne. Beat Yourself until you bleed. Until your back is nothing but a red, throbbing mass of bleeding flesh. You know you deserve it, and it's the only way. The only way.

Appearing in "Road to Redemption"Edit

Synopsis for "Road to Redemption"Edit

Tiring of Wolfsbane's depressed mood, Banshee and Polaris take her on a road trip to Vermont to speak with Rev. John Maddox.

And Madrox investigates a suicide case that isn’t what it initially seems.

Retrieved from "https://heykidscomics.fandom.com/wiki/X-Factor_Vol_1_237?oldid=1512156"
Community content is available under CC-BY-SA unless otherwise noted.