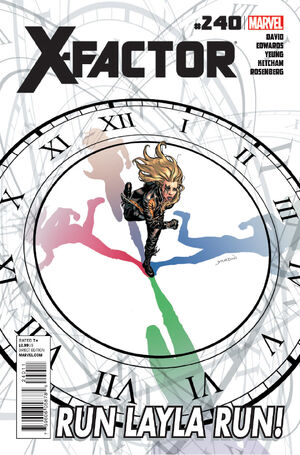 Because destiny isn't what's handed to you. Destiny is what you try to seize with both hands..and never stop running towards.

Layla sits in the X-Factor headquarters, waiting for the time she is supposed to save a girl from suicide. She starts running but stops when she sees a homeless lady being accosted by a gang. She sees that the lady will be alright on her own but that the city will suddenly lose power because Guido was fighting Behemoth. This leads to a traffic jamt that prevents her from taking the taxi she was to take to save the girl. Saving Guido changed the future and caused her to have a kind of mental short-circuit which results in her being able to see a myriad of possibilities when things get stressed.

Meanwhile, Guido is chasing after Monet and apologizing to her. Monet is angry with him for abandoning her during their date but Guido argues that he saw Behemoth running and he assumed he was up to no good. Monet is angry that her company wasn't enough for Guido and he had to go pick a fight. Their argument grows heated and Guido admits that he fought Behemoth because he wanted to impress Monet before storming off. Layla sees two possible futures. One in which Monet goes after Guido which leads to them becoming lovers and the other in which Monet lets him leave which results in the two of them locked in combat with each other.

Meanwhile, Layla has reached the girl who is on the opposite side of where Layla expected her to be. Layla scares her and she trips and falls but Layla manages to create a force field which saves the girl from dying. Layla is worried because she saw herself talking the girl down from the ledge and convincing her not to let the kids that had been cyberbullying her win. Saving her the way she did however has the same effect and the girl vows not to try to take her life again. Layla reveals that she can still see two paths but saving the girl put her closer towards the one she desires. In one of the two paths, Lalya's husband Jamie is saved by medical techniques developed by the girl that Layla saved. In the other, Layla is placing flowers on Jamie's grave.

Retrieved from "https://heykidscomics.fandom.com/wiki/X-Factor_Vol_1_240?oldid=1468830"
Community content is available under CC-BY-SA unless otherwise noted.