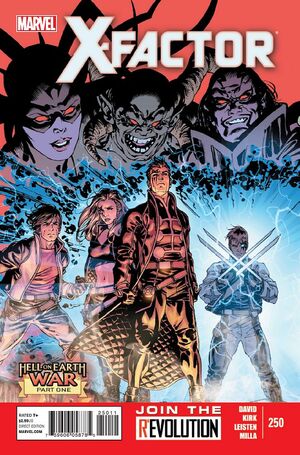 • A year of X-FACTOR stories culminates here in the first part of “HELL ON EARTH WAR”! • The various Hell lords battle for domination in a war that was triggered by the seven billionth soul born on Earth, and only X-Factor can avoid the entire world going up in flames! • This is the beginning of the end for X-Factor as you know it...

Retrieved from "https://heykidscomics.fandom.com/wiki/X-Factor_Vol_1_250?oldid=1732574"
Community content is available under CC-BY-SA unless otherwise noted.