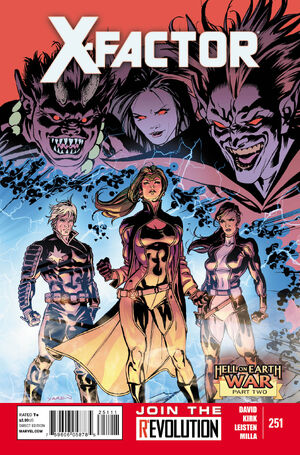 ...And someone's going to kill him so they can rule over all the hells.

“HELL ON EARTH WAR” CONTINUES! • The story years in the making continues here as X-Factor struggles to stop the Lords of Hell from tearing the Earth apart in their battle for dominance! • Familiar faces will return as the battle reaches a fever pitch, the first of whom is STRONG GUY! And he has a bone to pick with his former teammates…

Retrieved from "https://heykidscomics.fandom.com/wiki/X-Factor_Vol_1_251?oldid=1468853"
Community content is available under CC-BY-SA unless otherwise noted.