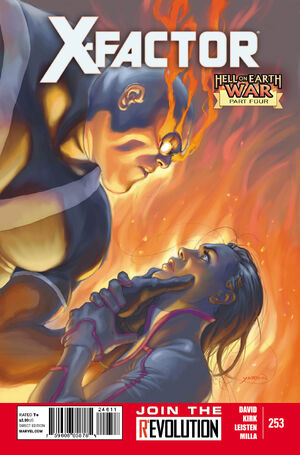 "HELL ON EARTH WAR" Continues! The story years in the making continues here as X-Factor struggles to stop the Lords of Hell from tearing the Earth apart in their battle for dominance! Wolfsbane fights for the life of her son, Tier. His birth signaled the start of this war...and now she needs to keep him from falling into the clutches of those who would kill him to end it! And as X-Factor is caught in the crossfire, a member of the team falls into Hell's clutches...

Retrieved from "https://heykidscomics.fandom.com/wiki/X-Factor_Vol_1_253?oldid=1728096"
Community content is available under CC-BY-SA unless otherwise noted.