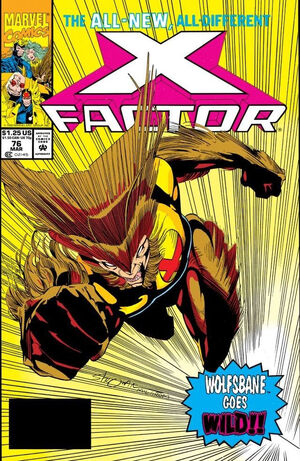 Uh oh. Friends of yours, Chuckles?

X-Factor is fighting the Pantheon and their ally, the Hulk, in Trans-Sabal. Havok has disappeared when blasting the Hulk and Wolfsbane was knocked miles from the scene. She is found by a man called Jolel, a religious zealot, and his sister and they tie her up, thinking she is part of the Pantheon. With the aid of the sister, Rahne can escape but then Jolel kills his sister and Rahne losing control in turn kills him. She is taken from the place by Quicksilver, while X-Factor defeats a part of the Pantheon.

Retrieved from "https://heykidscomics.fandom.com/wiki/X-Factor_Vol_1_76?oldid=1468600"
Community content is available under CC-BY-SA unless otherwise noted.