Start a Wiki
Part of the 'Decimation' event 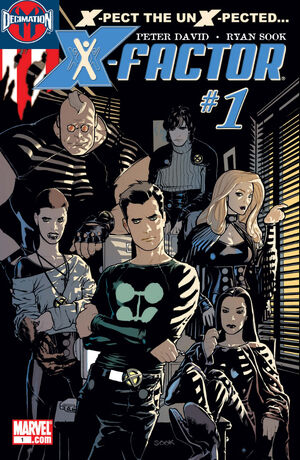 The story opens with Richtor standing at the ledge of a building preparing to jump. Madrox creates a few dupes and determines which would be the best candidate for saving him. Rictor reveals that he is up on the ledge because he lost his powers in M-Day and doesn't want to live without them. Madrox manages to talk Richtor into staying alive with some help from Rahen and coming to work for him at his new detective agency. Just as Richtor is about to get off the ledge however, Madrox pushes him off the ledge.

Meanwhile Siryn uses her abilities to charm a young woman out of information on a crime boss. Their conversation is interrupted however when the young woman is brutally assassinated. Siryn pursues the assassin but before she is able to catch her, the assassin kills herself. Back at X-Factor Investigations headquarters, a mysterious girl wanders in to the office and tells Siryn that the assassin was an operative for a detective agency called "Singularity Investigations".

BONUS: A key player from HOUSE OF M will play a major roll in X-FACTOR! (No, it’s not Wolverine—sigh)

Retrieved from "https://heykidscomics.fandom.com/wiki/X-Factor_Vol_3_1?oldid=1569663"
Community content is available under CC-BY-SA unless otherwise noted.