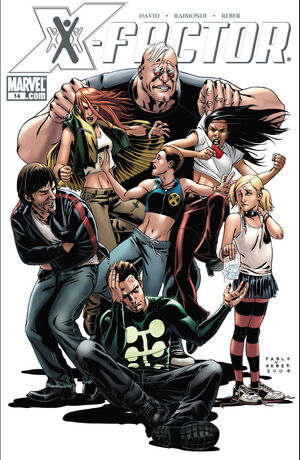 Sounds like, either way, anyone in the first five rows is gonna get soaked.

Jamie tries to reconcile with Siryn and M after they discover the he and a dupe slept with them both. Siryn is too angry to speak a thus risk losing control of her voice, while M repeatedly slams Jamie against a wall to try and force out the dupe who slept with her. Afterwards, Jamie meets with Rictor at a bar. After prompting from Rictor, Jamie says that Monet was better in bed. Rictor discusses his involvement with Quicksilver, who is promising to restore Rictor's powers with the Terrigen Mists.

Later, Jamie meets Doc Samson at the Zoo. Samson advises him to collect the long-term dupes Jamie sent out to learn new skills. Acting on this advice, Jamie goes to SHIELD headquarters to find the one that became an agent. There he meets Val Cooper who informs him that SHIELD new he wasn't theirs, because he lacked a subcutaneous chip. Outside, a girl scout offers him cookies, but it's really a trick by HYDRA to abduct Jamie's SHIELD dupe. HYDRA naps the original Jamie instead.

M and Siryn decide to go shopping in Paris after Layla threatens to make them reconcile if they don't do it on their own.

Wolfsbane and Strong Guy meet with Alix Buchanan, Dr. Buchanan's widow, to confess his involvement in her husband's death. She forgives him because she's a super-Christian who believes everything happens for a reason.

Retrieved from "https://heykidscomics.fandom.com/wiki/X-Factor_Vol_3_14?oldid=1468917"
Community content is available under CC-BY-SA unless otherwise noted.