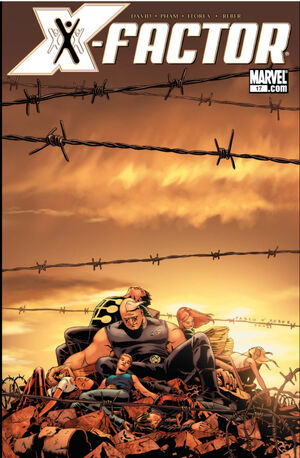 What do you mean "we," paleface?

In D.C., "last Christmas" the terrorist organization targets the undersecretary of Defense by sending him a booby-trapped stuffed elephant to his granddaughter as a Christmas present. The attack it thwarted when his son-in-law, a cop, shoots the attacking elephant. A note inside the box reads "We want our powers back. --The X-Cell."

In Detroit, Jamie tracks down a long-term dupe he sent out to become the world's best detective. Jamie finds him sitting drunk in front of a police station. In the course of their bantering, the dupe says he succeeded in his mission and claims information he uncovered has turned him to a wretch. He also claims to know the true source of Jamie's powers and why his dupes have been going wonky lately, as well giving a cryptic warning about "Uber." The dupe then shoots and kills a corrupt precinct captain, before being gunned down by cops, which stops Jamie from reabsorbing the dupe and gaining his knowledge. Jamie receives a phone call from Layla telling him he'll be needed back to New York.

Back in New York, Rictor and Wolfsbane stop an apparent mugging, but it turns out the muggers were federal agents in the course of an arrest. Rictor and Rahne are arrested. X-Factor headquarters is raided and Layla and Guido arrested as well.

Jamie arrives in Mutant Town to find his building surrounded. He's picked up by some muscle and meets Val Cooper in a limo. She enlists his help in fighting X-Cell, a terrorist formed by depowered mutants who believe that the government was responsible for M-Day. Cooper reveals that the supposed mugging victim Rahne and Rictor saved was an X-Cell member named Elijah Cross.

Cross goes to Quicksilver and asks him for help.

Retrieved from "https://heykidscomics.fandom.com/wiki/X-Factor_Vol_3_17?oldid=1468924"
Community content is available under CC-BY-SA unless otherwise noted.