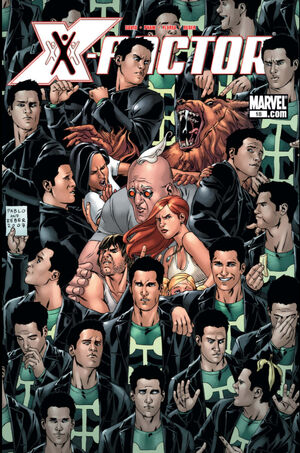 His contact is named "Robert" and he claims to live in a pineapple under the sea. I'm figuring that's code for a secret aquatic base.

Elijah Cross, believing the government responsible for M-Day, asks Quicksilver for help in restoring X-Cell's powers using the Terrigen crystals. Quicksilver agrees, but Callisto shows up and tried to stop him. He easily defeats her by drawing future versions of himself for assistance.

Rictor is interrogated by investigators about his involvement with X-Cell (having accidentally saved Elijah Cross from arrest last issue). He toys with his interrogator and is released by Val Cooper, who says Madrox has agreed to help apprehend X-Cell; Rictor then, as a member of Madrox's team, is free to go.

M and Siryn, flying back from Paris with Nicole, spot the army leaving X-Factor headquarters. They head inside, where Layla is advising Jamie, Rictor, Wolfsbane and Strong Guy not to get involved with X-Cell, that X-Cell with self-destruct on its own. M is angry upon learning that Jamie has agreed to help catch the former mutants, saying they should just tell X-Cell the truth behind M-Day. She is tripped up and unresponsive, however, when Nicole asks what that truth is.

Layla, realizing that X-Factor isn't going to do nothing, gives the team pieces of paper with instructions on random places to go. Jamie and Rictor go to a deli and are surprised to find Layla had simply called in an order for sandhiches. M and Siryn are told to stand on a street corner, and are mistaken for prostitutes. Strong Guy and Rahne are told to go into the sewer by entering the manhole at Bachman and 5th, but do not because Strong Guy is too big to fit in the hole and Wolfsbane's nose is too sensitive.

Walking back with the sandwiches, Jamie and Rictor are accosted by a depowered and very hungry Blob. In the fight, Fatale reveals herself, but has her arm broken by one of Jamie's dupes. She then cuts the dupe with a poisoned blade and she and the Blob escape in a stolen car. The car passes by M and Siryn who give chase. The car then hits the manhole Guido left improperly covered and crashes. M and Siryn are about to apprehend Fatale and Blob, but are attacked by Marrow.

Retrieved from "https://heykidscomics.fandom.com/wiki/X-Factor_Vol_3_18?oldid=1518373"
Community content is available under CC-BY-SA unless otherwise noted.