Part of the 'Endangered Species' event 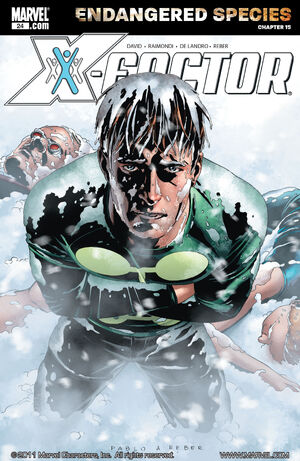 Appearing in "The Isolationist: Conclusion"Edit

Synopsis for "The Isolationist: Conclusion"Edit

In the wake of the Decimation, Pope Beast has put all of his efforts into attempting to solve the conundrum. In his desperation, he has come to beg the aid of the Inhumans. They turn him away.

This is a great surprise to Hank McCoy, who is eavesdropping through several dimensions thanks to the magic of Dr Stephen Strange. Dr Strange points out that the Scarlet Witch's spell affected a vast swathe of reality in some way or another, and nothing Hank can do now can stop it.

Hank is unconvinced, so Strange shows him more universes, where different versions of Hank are working on the same problem: outsiders, leaders, scientists, wizards, gunmen and transhumans. All are currently seeking an answer from some wise or powerful personage. None will meet with success.

Shaken by this, Hank leaves the Sanctum Sanctorum to look for the first domino to fall - he will search for Wanda Maximoff...

Retrieved from "https://heykidscomics.fandom.com/wiki/X-Factor_Vol_3_24?oldid=1643800"
Community content is available under CC-BY-SA unless otherwise noted.