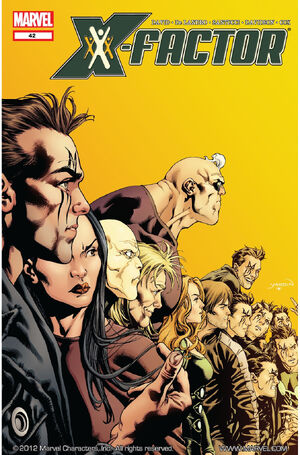 Well, well. Jamie Madrox. You look like crap, son. Like five miles of bad road. Welcome to the Summers Rebellion. Here's hoping you're far less worthless than you used to be.

In present-day Detroit, Rictor discovers a news article about the gunman who attacked John Maddox (Jamie's dupe) before killing himself. He shows it to Theresa and Guido. Theresa says it's not worth investigating because there's no client or case. However, Guido and Rictor decide to take a road trip to New England to meet the dupe.

Meanwhile, Longshot is staying with the client Lenore as a bodyguard, because she fears soemone is trying to kill her. Lenore finds herself very attracted to Longshot, but he rebuffs her advances, saying it would compromise his ability to protect her.

Eighty years into the future, on Earth-1191 Jamie meets Ruby Summers and adjusts to being in a new time...by puking. Jamie and Ruby get off on the wrong foot, but their conversation is interrupted by a Sentinel attack.

Back in Detroit, Theresa, Monet and Val Cooper argue over payment for the botched job in which Monet, Guido, and Darwin participated last issue.

On the road, Guido speculates that Rictor may be suicidal, citing as evidence the incident in Issue 38 when Rictor brandished a gun at federal agents as a diversion to let Theresa get to the hospital. Guido calls this "suicide by cop".

In the future, Ruby destroys one of the Sentinels with her optic blast. This leaves her vulnerable to an attack from a second Sentinel. Jamie intervenes by attacking the Sentinel with an army of dupes. The Sentinel dismisses Jamie as a threat and disperses the dupes with an electrical blast. The Sentinel is then destroyed by Daemon, who burns it up. Daemon has arrived with reinforcements from the Summers Rebellion, including Hecat'e who hides Jamie with her darkness power.

Back in Detroit, Lenore's door buzzer goes off, and it's revealed to be Lenore's mother, who surprisingly shoots her. Longshot's luck powers active and two eventualities are shown, one where he saves Lenore and one where Lenore is shot.

Back in the future, the group is saved from another Sentinel by the intervention of a very old and half-robot Scott Summers.

Retrieved from "https://heykidscomics.fandom.com/wiki/X-Factor_Vol_3_42?oldid=1468975"
Community content is available under CC-BY-SA unless otherwise noted.