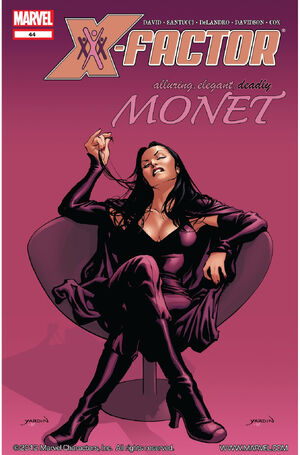 It's not okay. There's no crying in noir.

The issue opens with Multiple Man in the future. Jamie has just woken up and shaved. Layla Miller greets him. The discuss the scratches Siryn gave him after he absorbed their dupe baby. Jamie starts crying about it, but is caught by Ruby Summers and Cyclops (Scott Summers). Jamie is determined to complete the mission Scott gave him of discovering why people are blinking in and out of existence. Jamie theorizes that someone is travelling back in time to change things around, like in the Terminator movies. Scott says that's impossible because going back in time and changing things only creates alternate realities. Jamie says they need to meet with like Reed Richards, but Scott says Reed is long gone. Jamie specifies that he meant someone "like" Reed Richards.

Back in the present, Monet is attacking Longshot, while Theresa and Darwin try to stop her. She eventually eases off an comes to her senses. She gives Darwin a kiss after he expresses his concern for her, saying he is sweet. Lenore enters the room saying the doctor is on the way, but Theresa says the crisis is over and they don't need the doctor anymore. Monet offers to go with Lenore to talk to the doctor, but Darwin volunteers to do it instead, saying Monet should rest. Monet appears angered at first, but then thanks Armando for his consideration.

Monet explains that her attack was a result of psychic feedback from breaking through the barrier in Lenore's mother's head. She claims that the barrier was external in origin, but that whoever was in there fled. Longshot asks what it was that Monet said when she first regained consciousness.l He thinks it was "codex" or "cotex" (it was really "Cortex"). Theresa settles on "codex" because "Kotex" is a brand of tampons.

Monet suggests taking Lenore out of her apartment, and moving her to a new, safer location: a hotel penthouse paid for by Monet herself. Lenore asks that Darwin protect her this time, instead of Longshot, Monet says she'll accompany them, plus she's dressed all sexy-like, in a leather miniskirt and tube top.

At X-Factor headquarters, Val Cooper catches Theresa drinking out of a wine bottle, and snatches it from her because Theresa is an alcoholic. Theresa says it's just water, and that she drinks it out of a wine bottle because if Jesus loves her, he'll turn it into wine. It's part of the AA step 3: turning your life over to a higher power. Theresa tell Val not to judge her, because Val doesn't know what she's going through, but Val says she had a miscarriage five years ago, which shuts Theresa up.

In the future, Jamie, Layla, and Ruby arrive at the ruins of the hotel Darwin, Lenore, and Monet were staying in 80 years ago. After Jamie asks, Layla confirms that by this point, everybody in X-Factor has died. Doctor Doom is holed up in former hotel, hiding in some shrubberies.

In the present, Monet, Darwin, and Lenore have stayed up drinking all night. Lenore has passed out, but Darwin says his power protects him from getting drunk. Monet says that's interesting and attempts to seduce Darwin with he naked body. However, Darwin figures however much he would want Monet, she would never be this easy, and thus surmises that Monet is trying to use sex to pacify, so she can get Lenore alone and kill her.

Caught, Monet's skin changes to an electric purple, with circuits all over it, and her eyes turn red. Monet says she was trying to do it the easy way and make it fun for Darwin, because he's not on Cortex's list, but now she's going to have to kill him, and then she throws him against the wall.

Retrieved from "https://heykidscomics.fandom.com/wiki/X-Factor_Vol_3_44?oldid=1551004"
Community content is available under CC-BY-SA unless otherwise noted.