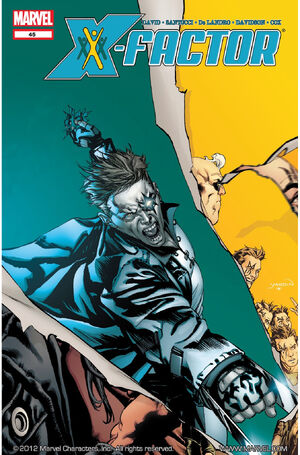 Madrox, Layla, and Ruby find Doctor Doom in Detroit, on Earth-1191. They find Doom aged and infirm, being attended by a busted, old robot servant, however he still believes himself to be at the height of his glory and wealth. Despite his senility, he quickly surmises that the group is there to learn about the manipulation of time due to a previous communication with Layla Miller, with whom Doom is rather taken. Unbeknownst to Madrox and Doom, they are being secretly observed by Dr. Falcone, science adviser to the President, and a man named "Shaw," presumably a descendant of Sebastian Shaw of the Hellfire Club. Falcone is puzzled that Madrox is alive and in Doom's apartment. Madrox originally died in the mutant concentration camps and they sent Cortex back to kill him again to make sure no weird time-travel thing happens to change the present. Falcone sends a squad of Sentinels to Detroit, and asks for a real-time link to Cortex.

In the present, Rictor (Julio Richter) and Strong Guy are fighting Shatterstar, who is being controlled by Cortex. Cortex himself is sitting on a park bench while he controls Shatterstar in the fight. He observes that Maddox did not replicate when struck, and hypothesizes that Madrox's dupes lose the ability to replicate if they are separated from him for too long. A cop comes by to usher him along, citing vagrancy laws, but Cortex grabs the cop's nightstick and shoves it through his stomach, killing him.

Guido comments on how light Shatterstar was, and Rictor explains that Shatterstar's bones are hollow and that he comes from the same dimension as Longshot. Rictor guesses that something is wrong with Shatterstar and that he's not acting like himself. He says they should help Shatterstar, not fight him. Shatterstar lands and runs to attack Strong Guy. At that moment, the real-time link from Falcone comes through and interrupts Cortex, who is belligerent and rude with Falcone, telling Falcone that he's too busy to talk so Falcone should go away. Falcone sends a pulse through the link as punishment. The pulse hits just as Shatterstar is getting ready to stab Strong Guy in the brain, and Cortex's mind control link is severed. Shatterstar falls to the ground, disoriented. Rictor rushes to reassure him that everything's alright. Shatterstar kisses Rictor.

Retrieved from "https://heykidscomics.fandom.com/wiki/X-Factor_Vol_3_45?oldid=1518365"
Community content is available under CC-BY-SA unless otherwise noted.