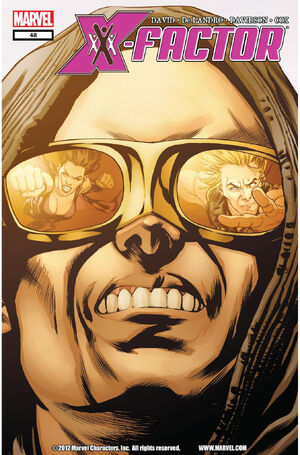 I swore that if I saw you again, I'd break your neck. I've had a month to dwell on muh state of mind when I said that. A month to regret it or not regret it or whichever way. Thankee. Thankee for coming back as an evil version so I would'na hafta doubt muhself no more.

Appearing in "The Cortex Equation"Edit

Cortex stands revealed! Or does he? The plan of the president’s science team threatens Madrox and Layla! Or does it? Shatterstar gets a milkshake! Or does he? It’s all going according to the plan of Doctor Doom! Or is it?

Retrieved from "https://heykidscomics.fandom.com/wiki/X-Factor_Vol_3_48?oldid=1468987"
Community content is available under CC-BY-SA unless otherwise noted.