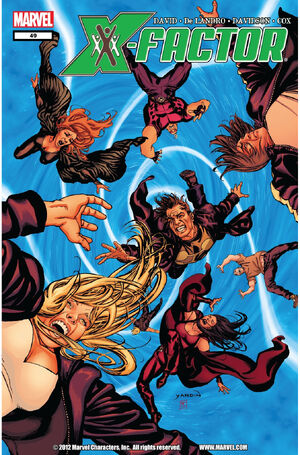 I am Victor von Doom. I have brought you here... And I believe you'll find that, while in transition, my technology has overwritten your command systems. You are taking orders from me. Now...so that they will not continue to confuse the commonweal by serving it...I would be most appreciative...if you would kill all the mutants.

In the present, Strong Guy and Rictor are driving home from New England while Shatterstar sleeps in the back. Guido and Rictor discuss Rictor's bisexuallity, with Guido being weirded out and surprised by it because Rictor never told him. While driving under an overpass, a man attempting suicide jumps from the bridge, but Guido catches him with his arm out the driver-side window. He warns the jumper not to try that agin or he'll come back and beat him up, then throw the fellow into bushes by the side of the road.

Shatterstar wakes him a describes how he was returning from the Mojoverse (which had become different from how he remembered it), when he met something else travelling through the dimensions, then all he could hear was "Cortex" until he woke up after the fight with Guido and Rictor and John Maddox's church. After Rictor comments on the long drive, Shatterstar touches Rictor's head and has him think of where he wants to go. Shatterstar cuts a hole in the roof, stands up, and opens an X-shaped portal that teleports them home.

Arriving, they find Val Cooper who warns them that the rest of X-Factor is in danger at the Carlton Hotel. Shatterstar introduces himself to Val, kisses her, then jumps back into the car, and the three drive off to the hotel.

80 years in the future, the Summers Rebellion is celebrating after defeating some Sentinels in Philadelphia. Madrox, after some ruminating, asks Layla Miller if it's all going to go to crap soon. She says yes, and he asks if there is anything that he can do to stop, to which she replies no. Then he asks her if he's the cause of it, she replies that he's only part of the cause. When asked then why did she bring him forward, she replies that she's the other part of the cause and that misery loves company.

Back at the rebellion's base, Cyclops questions Victor von Doom while Doom is working on the device to bring Cortex forward through time. Doom admits that he gave Doctor Falcone the technology necessary to build the doomlock cyborg, for no reason than that it suited him to do so. Then Doom compares himself and Cyclops, saying they are both relics of a more elegant time. That he sought power for his personal gain, and that Cyclops sought power for the benefit of the commonweal, but that the commonweal despised them both, Summers even more than Doom. This was because the public could understand Doom's selfish motivations, but were suspicious of Summer's altruism.

Back in the past, the fight turns on X-Factor. After Shatterstar cuts off Cortex's arm, he recognizes Cortex as the being who enslaved his mind and charges him. However, the arm on the ground grabs Shatterstar's leg, trips him, then grabs his neck and chokes him. Cortex then fires an energy blast at Guido' chest, knocking him down while Cortex affirms his goal of annihilating every one of them.

In the future, Madrox, Ruby Summers, and trevor Fitzrot arrive at Doom's workshop, looking for Scott. Doom tells them that Cyclops isn't there, then activates his device.

In the past, Cortex is gloating that Lenore only has Rictor and Darwin left to defend her. Just as Lenore screams at him to "go away" Dooms device activates and Cortex is dragged forward in time. Madrox is shocked to recognize Cortex as one of his dupes. Then Dooms announces that his technology has overridden Cortex's maker's commands, leaving Cortex in Doom's control. Doom then orders Cortex to kill all the mutants.

Retrieved from "https://heykidscomics.fandom.com/wiki/X-Factor_Vol_3_49?oldid=1517913"
Community content is available under CC-BY-SA unless otherwise noted.