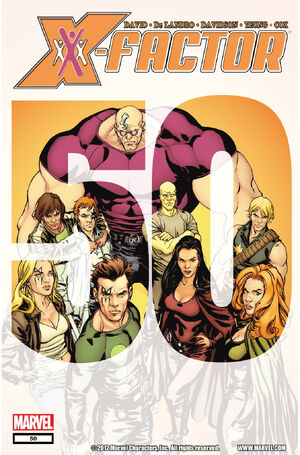 Worlds and times collide in this double-sized conclusion to the year long storyline that has revitalized X-Factor. Will the Summers Rebellion triumph as is supposed to happen...or will it be derailed? Will Madrox make it back to his own time? Will Siryn, Monet and the rest of the team have their final showdown with Cortex? Will we actually learn just how it is that Layla Miller knows stuff? Will someone die? The answer to at least some of these questions is: Yes

Retrieved from "https://heykidscomics.fandom.com/wiki/X-Factor_Vol_3_50?oldid=1759487"
Community content is available under CC-BY-SA unless otherwise noted.