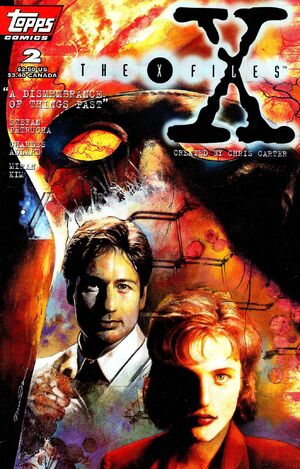 Director Skinner, Dana Sculley and the Lone Gunmen burst into Mulder's apartment and find him lying unconscious on the floor. They rush him to the hospital where they learn that he has been infected by a psychotropic drug that had been left on a flash drive he had stolen from Rauch Industries.

Later, Scully meets with Rauch employee Doctor Purman. She asks him about the drive, but he claims to know nothing. She accuses Rauch of deliberately infecting employee Noah Park because he was going to reject its evaluation. Purman remains tight-lipped and Scully leaves frustrated. Moments later, Purman places a private telephone call to her, telling her that her life is in danger. His conscious has gotten the better of him and he all but states that Rauch is responsible for Noah's death. After Purman hangs up, he gets into his car and begins driving. Suddenly he begins seeing visions, and it becomes clear that his superiors discovered his secret phone call to Scully and infected him with the bio-weapon. Purman's car goes off a bridge and he is killed.

Scully and the Lone Gunmen visit Mulder who is steadily recovering from the effects of the drug. He is more than ready to get back on the case.

Later, Director Skinner and his agents apprehend the man who had Doctor Purman killed. They take him to the Federal Detention Center in Alexandria, Virginia, but the man isn't talking. When no one is watching, he produces a drug tablet from his shoe and uses it to commit suicide.

With no other witnesses to implicate Rauch Industries, Mulder volunteers to testify before Congress. Unfortunately, his testimony convinces them that Rauch's bio-weapon is a success - which is exactly what they wanted to hear.

Retrieved from "https://heykidscomics.fandom.com/wiki/X-Files_Vol_2_2?oldid=1691920"
Community content is available under CC-BY-SA unless otherwise noted.