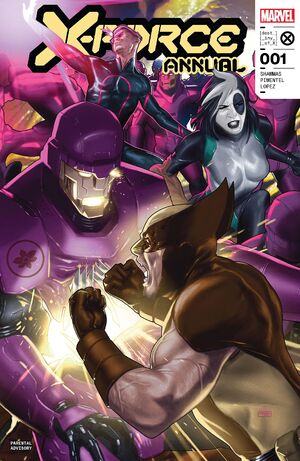 Wolverine is sent into the heart of a Hydra base alone. His mission: like a needle in a haystack, he's tasked with bringing in one specific Hydra agent. But why? And what does this mission have to do with the dwindling mutant population and X-Force? Plus, a NECROSHA BONUS FEATURE!! The Black Queen's forces are consuming Utopia. The X-Men and X-Force fight for their lives. And amid the chaos, a squad of resurrected Acolytes have come for the former White King of the Hellfire Club...Magneto. But what they find instead is much, much worse: DEADPOOL! The Merc With a Mouth (and Loa) joins the fight in 'UNDEADPOOL.'

Without being specified, Deadpool's story occurs during Necrosha.

Retrieved from "https://heykidscomics.fandom.com/wiki/X-Force_Annual_Vol_3_1?oldid=1649224"
Community content is available under CC-BY-SA unless otherwise noted.