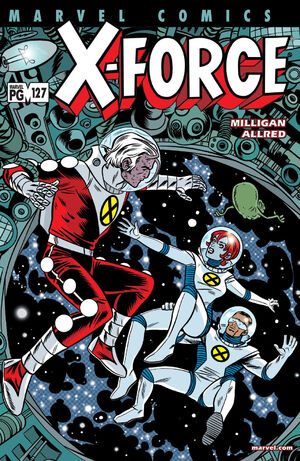 I ain't no traitor. I'm the Spike.

The issue begins with an artist's rendering of X-Force lying dead on the Mars 2010 Space Station and a news report that the C.I.A. Crack Squad is heading to the station to look for survivors. Up on the station, however, the team is seen relaxing. They are waiting for the squad to get closer before they allow themselves to be taken hostage by the Bush Rangers. The entire thing is a publicity stunt to make everyone forget about the Paco Perez incident. The team had refused to turn over a boy whose mutant power was the ability to cure any disease to the United States government for experiments.

Spike is seen talking with the Bush Rangers. He is discussing the reasons he has abandoned X-Force to side with them. He tells them about the publicity stunt, making them understand that they will be captured by the C.I.A.

X-Force confronts the Bush Rangers, only to find that they have all taken the form of Spike. The Bush Rangers have the ability to replicate, but it has made them crazy. The Anarchist attacks, killing who he believes is the real Spike. Dead Girl rushes into battle and gets her arm blown off. The severed arm continues to fight one of the "Spikes" while the rest of her takes on another. Phat is hit with a spike projectile and Myles looks after him. When the Orphan orders him to leave Phat and help Dead Girl, Myles refuses. Dead Girl is in at least five pieces by now, each of them taking on a different target. The "real" Spike saves the Anarchist and apologizes for the way he's been acting toward him.

By the time the C.I.A. has arrived, the Bush Rangers have been defeated. Agent Wright informs X-Force that there is a new plan. They will tell everyone on Earth that they attempted to rescue X-Force, but were unsuccessful. Right as he is about to have his men fire on them, Edie transports Guy, Tike, Doop and herself to a nearby spaceship. On the communication screen, Wright explains that the ship is on its way to deep space and that there is no way to stop it. They are trapped inside. He explains that his daughter is very sick, waiting for a miracle. Paco Perez could have been that miracle, so he is killing them as an act of vengeance.

Aboard the station, the remaining members attack. When Wright reaches into his pocket, "Spike" kills him. Instead of finding a weapon, the agent is gripping a picture of his young daughter. "Spike" leads the others back to their ship, saying that they are X-Force now that the Orphan and his group are gone.

Back aboard the runaway ship, Tike finds an escape pod. Unfortunately, there is only room for two of them and Doop. On the station a lone survivor is badly injured. This is actually the real Spike. The man who killed Wright and left with the others is one of the Bush Rangers. The final shot of the issue is of Tike, Edie and Guy rolling a die to determine which two will live and which will stay behind on the ship, sacrificing their life.

Retrieved from "https://heykidscomics.fandom.com/wiki/X-Force_Vol_1_127?oldid=1404521"
Community content is available under CC-BY-SA unless otherwise noted.