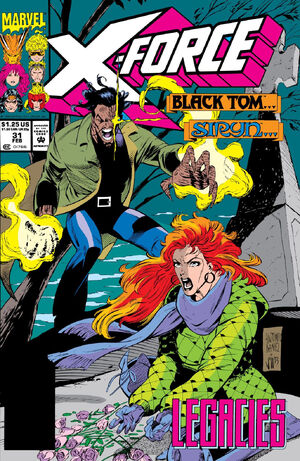 Ireland
Warpath meets with the reporter Kelvin Doneghann. He looks over pictures of Sean, Tom and Theresa Cassidy. He speaks to Kelvin about the recent attack by Tom on the family lawyer as well as his disappearance into the Irish country. He tells Kelvin that Siryn believes Tom and the Juggernaut to still be in Ireland somewhere.

Cassidy Keep
Theresa sits out in the garden drinking. She is so drunk that she passes out in the garden. Warpath comes home and helps her inside and cleans her up. He asks Theresa to allow him to help her. She stubbornly tells him that she has to deal with it on her own.

Ireland
Juggernaut secretly meets with Kelvin in a pub. He tells him that he is worried about the health of his friend and believes that it is declining. He explains how Tom originally was in love with Maeve Rourke and that he had to deal with Sean winning her and then her death after the birth of Theresa. Tom was forced to raise Theresa while Sean was secretly working in Interpol. He then turned to a life of crime since he blamed everyone else for his problems.

Cassidy Keep
James wakes up and grabs a coffee. He meets Theresa in the garden. She is cleaning it up and says that she is ready to deal with things. She tells James how she first drank alcohol and how it affected her.

Meanwhile, Kelvin receives a fax from the research lab in France that worked on Tom. It shows him that Tom is dying and does not have long to live. James meets with Juggernaut in a church and tells him that he is willing to help Tom if he meets with Siryn. Juggernaut agrees to set up the meeting at the grave of Maeve Rourke.

Later, Black Tom and Siryn meet at Maeve's grave. Tom begins to argue with Theresa. Terry tells him that he has no reason to argue anything. He continues to blames others for his problems and never learned to deal with them. She tells him that she has finally allowed herself to deal with things and pours out her bottle of alcohol she has with her. Theresa turns and sees Jimmy waiting with the police. She says goodbye to Tom as he is hauled off by the police. Juggernaut then thanks Warpath for helping Tom.

Retrieved from "https://heykidscomics.fandom.com/wiki/X-Force_Vol_1_31?oldid=1404425"
Community content is available under CC-BY-SA unless otherwise noted.