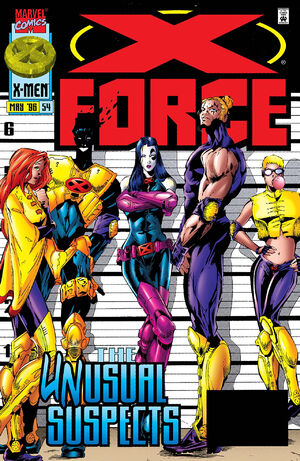 I will not cooperate with you. I wish only to have my swords returned to me -- and this farce ended.

New York Police Station
Sunspot is interrogated by Charlotte Jones of the New York Police Department. She is wondering why he and X-Force were all caught in proximity of the bodies of Gideon and other mutants. Sunspot denies that he nor X-Force had anything to do with the External's deaths. He tries to explain that they were killed by Selene, whom was not found at the scene of the crime. Charlotte tells him that X-Force is not cooperating with their investigation. The rest of the detectives feel that they need to move on to the next suspect.

Next to be interrogated is Siryn. The detectives seem more interested in finding out about her and her team than they do about learning about the investigation. Siryn tells them that Warpath was almost sucked into the building and he was not found. She then tries to tell them again about the Externals and the police still don't believe the stories they are hearing.

Domino sits down to be questioned by the police. The detective asks one question and she does not budge. He then kicks her out and brings in Meltdown. They ask her about Crule and she tells them that the guy was the last of the Externals. He attempted to kill Selene, but she instead drained his life force. Suddenly, Cable appeared and blasted her with his telekinesis. She tries to drain his life force, but it unable to do so. Then everyone tries to attack at once and she knocks them all out except for Meltdown.

Selene is overjoyed that she has only one more External to kill. Meltdown tells her that Cannonball will take care of her instead. Selene laughs and tells her that Cannonball is not an External as was believed. She tells Meltdown to ask Cable about that and then disappears. Blaquesmith then suddenly appears and goes to Cable's side. He then sends out a psychic message to them all that they should not remember his presence and then they all black out. They wake up next to the police originally picking them up at the scene of the crime.

Retrieved from "https://heykidscomics.fandom.com/wiki/X-Force_Vol_1_54?oldid=1517928"
Community content is available under CC-BY-SA unless otherwise noted.