Start a Wiki
Part of the 'Shatterstar Saga' story arc 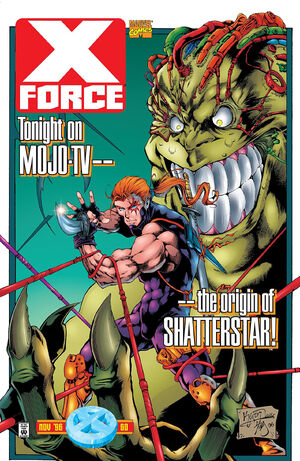 Sit back down. The show hasn't even begun...

Appearing in "I Know YOU Are But What Am I? (Shatterstar Saga, Pt. 2)"Edit

Synopsis for "I Know YOU Are But What Am I? (Shatterstar Saga, Pt. 2)"Edit

Dr. Strange's Mansion
X-Force and Longshot arrive at Dr. Strange's mansion. Domino is surprised that she has never seen this mansion before but has been in the area often. They are going to sneak inside, when the mansion's window opens and they are pulled inside. They meet Dr. Strange who apologizes for his precautions. Longshot asks him to make send him and X-Force to Mojoworld. Dr. Strange tells him that he no longer has the power to do so. Longshot tells him to at least try to do it and he might have some luck.

South Beach, Miami
Risque enters her home in South Beach. She decides to come back to gather her things to go back to find Warpath. She is met by both Mimic and Blob who reveal that they pulled her from Xavier's mansion when Sinister attacked. She tells them that she is not following them any longer and she is going to head back to Warpath. Sledge sits in the shadows and tells her that is not a part of their deal.

Mojoworld
Mojo has Shatterstar and Cable in front of a screen watching the televised battle that is supposed to take place on Mojoworld 100 years from this day. He shows how Shatterstar poses ready to kill Mojo and end the battle. Shatterstar tells him that he is not Shatterstar and he is instead Benjamin Russell from Boston. Cable then breaks from his chair and tries to help Shatterstar. Spiral knocks Cable out and tells him the show hasn't even begun.

Elsewhere, X-Force and Longshot teleport to Mojoworld. They land near each other and are suddenly surrounded by a massive army. Dazzler greets Longshot and acknowledges X-Force. Dazzler tells them that Mojo has turned from just televised battles into real war. She asks for their help in taking Mojo down once and for all. Longshot says the war will end with Mojo's death, but it begins with the martyrdom of Shatterstar. Rictor is surprised and Longshot tells him that Shatterstar may not die if they have a little luck.

Later, X-Force and the rebel army come across Mojo's palace. It is guarded by Gog and Ma'gog. X-Force attacks and takes the two down. Dazzler advises that Mojo must have moved on since the palace was not guarded. Domino takes the team in though to look for their missing teammates. Inside, they find a single TV with a remote. She turns it on and they see a Mojo-televised event featuring Cable and Shatterstar. Longshot fears the worst for their friends. In Vermont, a family sits in front of a TV and almost like zombies, watch the Mojo-televised event.

Retrieved from "https://heykidscomics.fandom.com/wiki/X-Force_Vol_1_60?oldid=1404454"
Community content is available under CC-BY-SA unless otherwise noted.