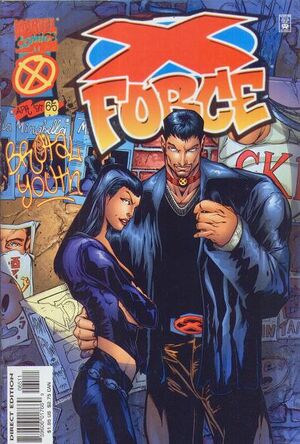 Whoa, you got one arm free! You should be proud, kid. Ain't too many people could pull that off.

Appearing in "Lower East Side Story"Edit

Synopsis for "Lower East Side Story"Edit

Breakstone Lake
James Proudstar swims in the cold waters of the lake. He thinks he is alone, but someone stalks him from beneath the waters. He is then pulled below the waters and soon learns that it is his new girlfriend, Risque. They start laughing as she lets him to the surface and she tells him that she was only trying to have some fun. They go back to his room in the mansion and she sees that he does not have much and comments that he needs to change his wardrobe. Siryn walks in as they are kissing and James feels embarrassed, while Siryn is also a little jealous. They ask her to go out on the town with them and Siryn tells them no.

New York City
Warpath and Risque walk through the streets of the East Village. A local psychic tries to get them to come inside and Risque tells her no and then gives a free reading to Warpath, telling him that he is going to have a very good night. They get to the local club that Risque is taking him to. They are allowed to cut in line once the doorman sees that it is Risque.

They go to the bar and meet with the owner, Luis Rodriguez. He welcomes Risque and also greets her new boyfriend, Warpath. She goes off to the bathroom while James waits at the bar. As she walks past a man who is flirting with a woman, he suddenly turns white as he sees who she is. The man runs to the bar and tells his friend that it is time to leave and they discuss Risque's putting a man in a hospital in Miami and the man is afraid she will do it again. Warpath asks Luis about this and learns that he doesn't know that much about her either.

X-Mansion
Shatterstar and Siryn spar in the Danger Room. He warns her that she is not there emotionally and this is causing her to be bad in battle. He wins their battle and then they stop the scenario. They sit on the floor and Siryn admits that she is having trouble with men in her life and she does not know what to do. Shatterstar tells her he is not the best person to talk about this with and then they both hear music playing outside. They rush off to find out who is playing the music. They find Meltdown and Sunspot standing in a doorway spying on the one playing the piano and it turns out to be Caliban.

New York City
Risque comes back from the bathroom and while walking out, she notices the Blob. He tells her that he is there to get her boyfriend since she seems to have fallen for him. She is then met by another man who tells her that they have decided to go around her on this mission and they will finish the job. Risque runs off to get Warpath and they turn to see the Blob waiting for them.

X-Mansion
Caliban notices the group in the doorway and stops playing. He asks them if he is doing something wrong and they tell him to continue. He says that he does not remember the notes to play the song and then hits his head on the piano and starts convulsing. They all rush to his side to try to assist.

New York City
Risque drops the club's disco ball onto the Blob's head. They both run outside with the crowd and are met in the street by Mimic. Risque knocks part of a building on top of him. They see the Blob then waiting in the street. Warpath then runs up and tries to punch him. He soon realizes that this was a mistake and that his hand is stuck in the Blob. He works around until he frees one of his hands and then Risque then creates a hole in the ground and the Blob falls through. The Mimic goes to attack them and James grabs a street pole and knocks him out. The police arrive and Risque and Warpath take off into the streets.

Risque takes Warpath to one of her friend's apartments on the Lower West Side of town. She pours Warpath a drink and tells him that her friend is gone for a week. He asks her for answers since he is confused as to what just went on and why the Blob and Mimic were after him. She tells him the truth that she was supposed to capture him. He sips at the wine and then realizes what she said. As he turns to confront her, he realizes the wine was drugged and she stands over him and tells him that it was business to her.

Retrieved from "https://heykidscomics.fandom.com/wiki/X-Force_Vol_1_65?oldid=1549339"
Community content is available under CC-BY-SA unless otherwise noted.