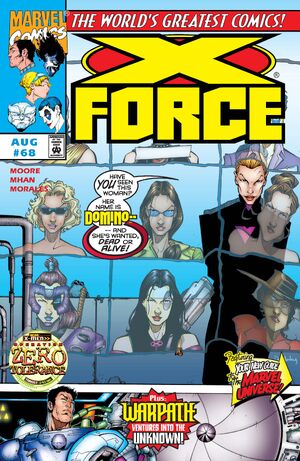 Since Meltdown's not here, someone has to blow something up.

Wakeman Research Center
Inside the Wakeman Research Center, both X-Force and the MLF learn they have to stand together against the Prime Sentinels who have revealed themselves to be posing as doctors. They then attack both teams and show that they have the same Sentinel defense systems but have them housed in human form. Many of the team members are taken out and the Sentinels finally begin to merge together into a primary power source that is preparing to surge.

Domino then tells them all that she snuck some plastique in her shoe and she is planning to use it while the rest of the team escapes. Domino walks up to the Sentinels and drops the plastique. The place explodes and several of the members escape by flying or being flown out of the explosion. They land at the news van and realize the rest of X-Force is missing or has been captured. They have no time to go looking for them and jump in as the rest of the Sentinels outside begin to shoot at the van. They speed off leaving Domino and the others behind.

Back inside the facility, Zero Tolerance Sentinels enter and find that there were survivors of the blast and they capture them and the commander is very happy that she was able to catch Domino and says that she will take care of her personally. They send the destroyed Sentinels back to the lab to be rebuilt.

Detroit, Michigan
Sledge sits in his warehouse watching the news stories about the Wakeman Center hostage situation as well as other stories of the X-Men being captured by other Zero Tolerance soldiers. He turns off the television and Warpath walks in wearing a containment suit that Sledge had created. Though Warpath does not like the suit, Sledge tells him that it is the ultimate containment suit and will protect him from any scenario that he may encounter on his mission. Warpath tells him that he is only going on this mission since Sledge assured him that he would give him Michael Whitecloud in exchange.

They walk to Sledge's interdimensional gateway. Warpath is amazed that Sledge would have such technology and Sledge tells him that he knew someone in the government that owed him a favor. Sledge turns on the machine and pulls up the correct dimension and then tells him that he is to go find his friend. He also tells Warpath that he was chosen for this mission due to his superhuman senses and strength. Warpath closes the helmet on the suit and prepares to enter the other dimension.

Wakeman Research Center
FBI agent Ritter meets with Commander Gryaznova and tells her that she is outside of her jurisdiction on this hostage situation and mutant custody. She tells him that she was brought in to do a job by the government and that if he had a problem with it, he needed to take it up with his congressman. She then enters a vehicle and video conferences with her leader, Bastion. She tells him of the mutants that were captured and those that escaped. When he asks about the status of Domino, she lies to him and tells him that she was killed in the battle.

Elsewhere
The X-Force and the MLF members who escaped the Wakeman Center try to figure out what their next course of action is going to be. Forearm tells Dani that he is surprised that she betrayed him and does not want anything to do with her or X-Force. Dani decides to join up with the X-Force team and go save their captured friends.

Commander Gryaznova's Holding Area
Domino awakens from her unconscious state and soon realizes that she was drugged. Gryaznova walks in and tells her that she is her prisoner. Domino tells her to go ahead and kill her and Gryaznova tells her that she is not going to kill her, but instead wants her to suffer for what she has done in her life. She then tells Domino that she has found information regarding what Gryaznova believes to be Domino's past and begins to tell her about the files. She tells her of a young 13-year-old girl that was arrested to her dealings with the death of her ex-husband and other recent dealings with X-Force.

Domino tells her that only a few things are true, but even some of it was not Domino but a shape-shifter posing as her. Gryaznova then tells her that in El Salvador Domino went to save a doctor and encountered a new cybernetic robot named Jericho. Domino used some sort of EMP weapon and fried the robot, which in turn put Gryaznova, who controlled the robot, into a coma. Gryaznova then tells her that when she awoke in the hospital she was turned into a Prime Sentinel and planned to eventually find Domino and take her revenge on her. Gryaznova then knocks Domino out. When Domino awakens, she is in a hospital and is being administered anesthesia while Gryaznova looks on.

Retrieved from "https://heykidscomics.fandom.com/wiki/X-Force_Vol_1_68?oldid=1512933"
Community content is available under CC-BY-SA unless otherwise noted.