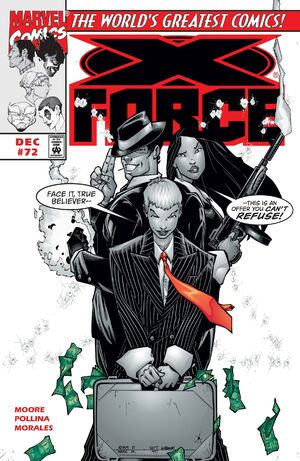 Appearing in "Lies and Deception"Edit

Synopsis for "Lies and Deception"Edit

Edgewood Hotel, Chicago
A couple of mobsters walk into the Edgewood Hotel guarding their boss, Jonas Blackshear. They head up to the room of Richie Alegria, who is now being guarded by Mirage, Sunspot and Meltdown. The mob-boss tells Richie to hand over the money he owes. Richie tells him that he needs more time to pay it back and tells Jonas that his bodyguards will take care of him if anything happens. The X-Force members were not aware that Richie owed money to the mob and feel like they were pulled into this battle. The gangsters pull their guns and Roberto shows them he means business by flaring up. The rest of X-Force tell the gangsters to back down and they do. As the gang leaves they tell Richie he has two weeks to pay up. Meltdown then throws a small bomb at the sprinklers, setting them off as the mobsters walk away.

Nebraska
Warpath has a dream involving his brother's body being hung on a cross above the bodies of his tribe and teammates. He turns and sees Siryn laying with the bodies. She tells him that he should have died along with the rest of them. Warpath screams while waking from his dream. He is a passenger in a car with Siryn and they are driving to find Michael Whitecloud. He tells her that he feels that he is cursed since all those around him continue to die. She tells him never to believe that as they pull into the city of Salvation.

They soon find the address that Sledge gave him and it turns out to be a vagrant hotel. James goes inside and tells Siryn to wait outside for him. He asks the front desk where Michael Whitecloud is at and is shown up the stairs to his room. Warpath barges inside the room and sees that the window is open. He pokes his head outside and sees Siryn has flown up and caught Whitecloud, who was attempting to escape. Whitecloud is drunk and James grabs him and begins to question him. Whitecloud tells him that he does not know where to begin.

Washington, D.C.
Domino heads into a bank and opens a safe deposit box. Inside she finds $200,000 in traveler's checks and five passports and six licenses. She grabs one of the passports she has not used in a while and walks out. The bank teller tells her goodbye and names her as Mrs. Winters. She is about to leave when some bank robbers yell out for everyone to get on the ground. One of the robbers singles her out and holds a gun to her head. An elderly gentleman hits him with his cane and the robber knocks him to the ground. Domino feels that she needs to do something and puts her sunglasses away as she gets ready to act.

Chicago
Richie Alegria pops open some champagne. Sunspot lifts him up and tells him that Richie should have told them that he owed money to the mob. The others agree and get ready to walk out on Richie. He pleads with them to stay and tells them that he will have the money to payback to the mob as well as more to give to them. He explains that he is a movie producer and plans to make a movie. Though they feel they will regret it, they listen. He tells them that he only needs one week and he will have all the money.

Nebraska
Whitecloud begins to tell his story regarding what happened to James' tribe. He tells them that he was met a radiologist named Lucius Dewitt who told him about a secret program named Project: Stepladder that was experimenting with genetics and using human convicts and runaways as test subjects. Whitecloud takes Lucius to his Camp Verde home and meets up with one of the test subjects named Gordon Thorpe. Gordon had become superhuman and was also exposed to something that gave him lung cancer. Whitecloud then left to make copies of the story they gave him and when he returned, he saw the entire camp in flames and people dressed in suits continuing to set the camp ablaze. He fled and ended up a drunk in Nebraska.

James and Theresa cannot believe that no one would listen to him. Whitecloud then goes to grab the number to a bus station locker in Topeka, Kansas. He says he threw the key away but that James should be able to bust the box open. Inside he should find the story Whitecloud had written. James grabs him and yells at Whitecloud to tell him who was behind it all. Whitecloud tells him that his head is ringing and it is getting worse. He then grabs his head and falls on his knees screaming. Suddenly, Whitecloud's head explodes. James and Theresa stare in horror at the body on the floor. They soon recover and say they must get out before they are blamed for his death.

Later, cops are picking up the body and looking for clues. An FBI agent named Martin Edwards also is investigating and is given the photo of Siryn and Warpath leaving the scene after Whitecloud's death. Martin grabs the photo and crunches it up thinking to himself that if only James Proudstar would have stayed out of things he would have been safe but now he will meet the fate of his tribesmen.

Ohio
A diner is closing up for the night and the workers are going home. One of the waitresses waits alone at the door to smoke a cigarette and wait for her ride while the others leave. Then a figure walks up and tells her that the Roberto da Costa others have been to this diner. The figure then turns and is shown to be Reignfire. He walks away and the body of the waitress lies dead on the ground behind him as he leaves.

Retrieved from "https://heykidscomics.fandom.com/wiki/X-Force_Vol_1_72?oldid=1519655"
Community content is available under CC-BY-SA unless otherwise noted.