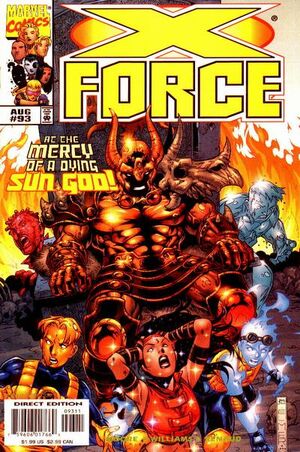 Appearing in "Temple of the Dying Sun"Edit

Synopsis for "Temple of the Dying Sun"Edit

X-Force (sans Domino and Sunspot) is fighting its way across an island which is undergoing rapid mutation of all flora, fauna, and even geological features. They dispose of a swarm of giant wasps with the help of Astarte and Electryon.

There's a flashback to San Francisco where we see the two Eternals convince Dani and thus the entire X-Force team to assist them.

Back in the present, While the Eternals observe, X-Force pushes through some killer vines and crystals to reach the Temple of the Dying Sun. The Eternals tell them that the device causing the disturbance is inside the temple.

They enter and discover a giant alien device. Bedlam tries to disrupt it, but that only makes things worse - transforming most of X-Force into elemental beings! Only Dani is unaffected, and she tries to use her quantum energy to counteract the device, but instead she is drained of energy! The Eternals enter and reveal they have been draining her of energy, and knocking Dani unconscious they then leave X-Force to their fate.

In San Francisco Domino returns to the X-Force warehouse to discover only Roberto DaCosta in residence, and he's packing! He reveals to her that INS is deporting him, or otherwise they will charge him as a terrorist. Domino tries to dissuade him from leaving, but he promises he'll be back in 6 months, and he leaves with two INS agents.

Dani awakes only to discover that she is not alone. The alien conqueror Ry'lor touches her and assimilates all of her history. Dani asks who he is, and he similarly shares with her his history. Learning he regrets his earlier actions, Dani convinces him to help her, and he explains that she still has power, but she must stop believing she is distinct from the universe and let it flow through her. Dani disables the alien device, and X-Force is restored to normal.

X-Force leaves the temple and finds the two Eternals talking with the Deviant Odysseus. They defeat the Eternals, and are trying to figure out how to return to San Francisco when Ry'lor's ship/temple lifts off, and Ry'lor stops to thank Dani for making him realize he can only atone with actions. Dani asks if he can give them a lift first...

Retrieved from "https://heykidscomics.fandom.com/wiki/X-Force_Vol_1_93?oldid=1569640"
Community content is available under CC-BY-SA unless otherwise noted.