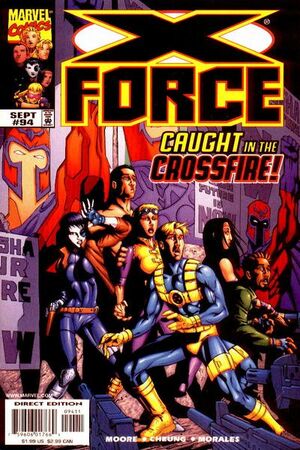 You may assume you know Magneto from your days as his students, but you don't know him at all. He will crush you if he believes you are standing in his way. Therefore, you are going to leave Genosha now. By force if necessary.

Appearing in "Artifacts and Apocrypha"Edit

Synopsis for "Artifacts and Apocrypha"Edit

X-Force is in Genosha trying to avoid Magneto's forces and the remnants of the Genoshan magistrates. Finding themselves caught between a magistrate checkpoint and a mutate patrol, they find themselves forced to disable both. A minor snag is resolved when their contact, Peter Wisdom, eliminates the last threat. Wisdom had lured X-Force here with a box that showed Cannonball a memory someone had of him in a field - a memory of him that he doesn't remember happening. Wisdom takes them to a curio shop, and explains that he brought them to Genosha to retrieve the satellite codenamed Faraway which has crashed in Hammer Bay. They also find the proprietor is capable of imprinting memories in objects - and she wants to trade them memories useful to their endeavor in exchange for a memory of theirs.

In Brazil, Bobby is unhappy with his lot as a rich playboy, and quickly scorns the attention of his latest conquest when he sees a woman being manhandled into an elevator. Interrupting the abduction, he finds he's picked a fight with some strange gargoyles, when they become encased in rock. Much to his surprise, he has rescued Selene! And Selene has a proposal for him...

Back in Genosha, most of X-Force surrenders a memory and in return receive a memory that will help them in entering the former government's genetics complex. While they are infiltrating the complex, Quicksilver receives word that they are in Genosha, and catches up with them in the sewers under the building. Sam distracts him with the box Wisdom used to lure him to Genosha in the first place, and then sucker punches him. Gaining a little time, they make their entrance to the cybernetics research room where Wisdom starts talking to a brain in a jar. But as soon as he picks it up, all the machinery in the room comes alive!

Retrieved from "https://heykidscomics.fandom.com/wiki/X-Force_Vol_1_94?oldid=1503685"
Community content is available under CC-BY-SA unless otherwise noted.