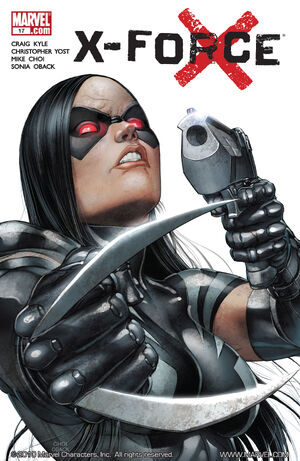 Appearing in "Not Forgotten (Part 1)"Edit

"NOT FORGOTTEN" Part 1 (of 4) MESSIAH WAR AFTERMATH! When X-Force was pulled into the future, what was forgotten in the present? The Leper Queen's murderous acts? The Sapien League's attack on the United Nations using two of the X-Men's students? Wolfsbane's reunion with the Asgardian Wolf Prince? H.A.M.M.E.R.'s hunt for X-23? After three months, the wait is over. Find out who lives and dies as the MESSIAH WAR ONE-SHOT art team of Mike Choi and Sonia Oback returns to X-FORCE!

Retrieved from "https://heykidscomics.fandom.com/wiki/X-Force_Vol_3_17?oldid=1649410"
Community content is available under CC-BY-SA unless otherwise noted.