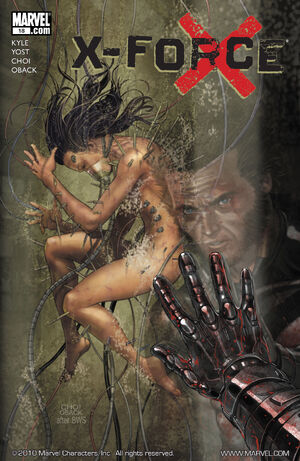 Appearing in "Not Forgotten (Part 2)"Edit

The fallout from MESSIAH WAR continues! X-23 is missing, and as horrific as her life has been...it's about to get worse. Elixir knows the truth about the mutant messiah. Wolverine confronts Cyclops about his decisions leading up to the War. Wolfsbane's journey back to X-Force begins. Bastion's master plan gets one step closer to fruition. And if all that weren't enough...Selene’s forces are on the move. More action and drama than any one comic has a right to have! Part 2 (of 4)

Retrieved from "https://heykidscomics.fandom.com/wiki/X-Force_Vol_3_18?oldid=1644499"
Community content is available under CC-BY-SA unless otherwise noted.