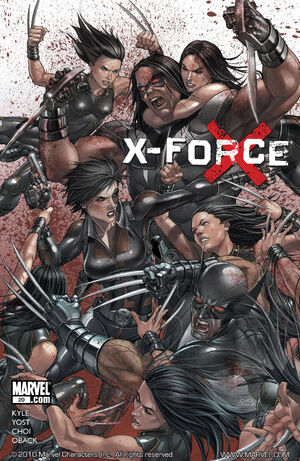 Appearing in "Not Forgotten (Part 4)"Edit

"NOT FORGOTTEN" The Facility created X-23 to be the ultimate killing machine, an assassin for hire that would never stop until her target was dead. And now they want more of her. But X-23's got a new target now... them. HAMMER Agent Morales is about to see a side of X-23 that only two people have ever seen...and lived to tell about it. PLUS... Wolfsbane is reunited with X-Force just as Selene's forces descend on the X-Men. To be continued in the X-FORCE/NEW MUTANTS: NECROSHA ONE-SHOT! Part 4 (of 4).

Retrieved from "https://heykidscomics.fandom.com/wiki/X-Force_Vol_3_20?oldid=1644502"
Community content is available under CC-BY-SA unless otherwise noted.