Start a Wiki
Part of the 'Necrosha' event 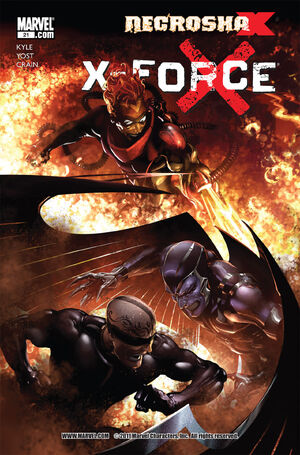 NECROSHA continues here!! The resurrected dead lay siege to the X-Men's headquarters, and the fight to survive the Black Queen's vengeance begins. But while Warpath and Wolverine realize what's happening, they may be too late to stop it. Because Selene is already well on her way to achieving ultimate power half a world away. And as the rest of the X-Men fight mutants back from the dead, Wolfsbane struggles to survive a very different threat. PLUS!! The long awaited return of the VANISHER. PART TWO (of FIVE)

Retrieved from "https://heykidscomics.fandom.com/wiki/X-Force_Vol_3_21?oldid=1650900"
Community content is available under CC-BY-SA unless otherwise noted.