Part of the 'Necrosha' event 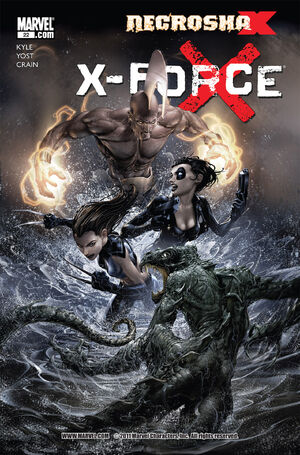 The unthinkable happens as NECROSHA continues! Selene's actions on Genosha have changed everything, and while the X-Men were desperate to save their species...this isn't what they had in mind. But as the siege by dead mutants continues, things get even deadlier with the arrival of Selene's very much ALIVE Inner Circle at the X-Men's headquarters. With Eli Bard in tow, WITHER, MORTIS, SENYAKA and BLINK have come for one thing, and anyone who gets in their way will die. PART THREE (of SIX) PLUS - A CABLE BACKUP STORY!

Retrieved from "https://heykidscomics.fandom.com/wiki/X-Force_Vol_3_22?oldid=1750858"
Community content is available under CC-BY-SA unless otherwise noted.