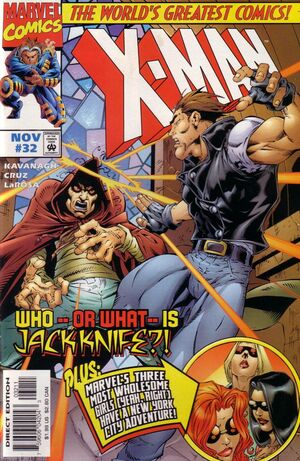 Check it! We got a genuine see-lebrity out on the floor tonight, nightwalkers... A mystery man whose talking we all been talking about... And a chance for our own little taste of that silver tongue. Hands up for local legend and rabble-rouser, Washington Square's own golden boy - Nate Grey!

-- Nate Grey's introduction by singer of the Lamelight club.

Appearing in "Catching Up From Behind"Edit

Synopsis for "Catching Up From Behind"Edit

Out for a rare night on the town, Nate is confronted by a homeless mutant who is also a killer.

Retrieved from "https://heykidscomics.fandom.com/wiki/X-Man_Vol_1_32?oldid=1469236"
Community content is available under CC-BY-SA unless otherwise noted.