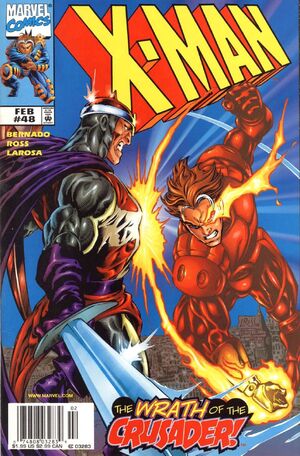 I've never claimed to be your God or anyone else's... I never wanted the notoriety my powers brought me. But at least I used those powers selflessly, to try to help people! You're the one who comes wrapped in all the holier-than-thou trappings and all you want to use your powers to do is kill, destroy, shed blood! You're a hypocrite and a bigger blasphemer than I could ever hope to be! And I've had more than enough of you!

Appearing in "The Blood of the Righteous"Edit

Synopsis for "The Blood of the Righteous"Edit

Nate has to defend himself from the Crusader who thinks he is on a mission from God.

Retrieved from "https://heykidscomics.fandom.com/wiki/X-Man_Vol_1_48?oldid=1469267"
Community content is available under CC-BY-SA unless otherwise noted.