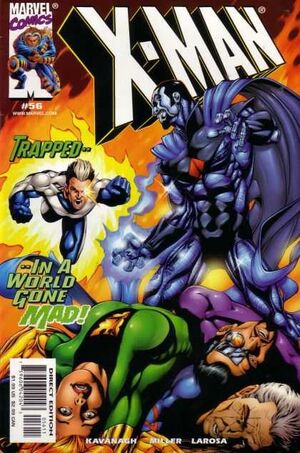 Is... Is it p-possible-- IS IT ACTUALLY POSSIBLE-- did I finally do what everyone's been afraid I would do? What I've been afraid I could do?! Sparked by a dream, maybe, or just a passin' thought o' some sort-- nothing more than an unconscious whim-- Have I somehow recreated the world around me in my own image?

Waking up in the idyllic world of Greyville, Nate smiles and welcomes another day in his perfect life. He's got a girlfriend, no secret identity and no real problems. He even gets to save people and fight the occasional super-villain with his pal Spider-Man! So what's the catch? It's all fake people, and the person that dreamed it up is out to steal the X-Man's incredible power for himself!

Retrieved from "https://heykidscomics.fandom.com/wiki/X-Man_Vol_1_56?oldid=1469283"
Community content is available under CC-BY-SA unless otherwise noted.