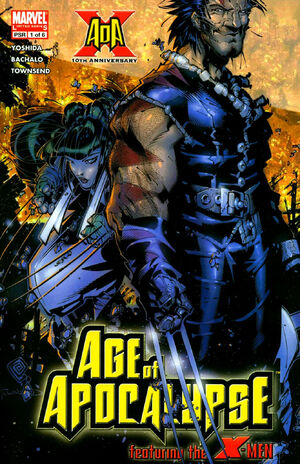 In northern Canada, a cloaked figure kills three of Apocalypse's hideous mutates with its adamantium claws. Magneto, Acting Director of Mutant Affairs, declares his responsibility for hunting down any surviving mutants who allied with Apocalypse; he shows a press conference a live video feed from his team's raid on the Hellions. Magneto has also sent X-23 to track down Weapon X and bring him back to the team.

Retrieved from "https://heykidscomics.fandom.com/wiki/X-Men:_Age_of_Apocalypse_Vol_1_1?oldid=1470212"
Community content is available under CC-BY-SA unless otherwise noted.