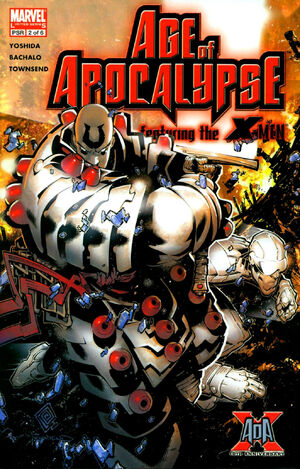 Appearing in "Coming Up For Air"Edit

Synopsis for "Coming Up For Air"Edit

Magneto and his X-Men descend into the sewers to emancipate the Morlocks, but they resist violently. Feral eviscerates Xorn (Paige Guthrie), and Magneto orders Storm to end the fight. Her lightning storm hits Magneto as well, but Leech saps her powers, and Annalee takes Magneto's helmet and shows him his greatest fear: Mr. Sinister holding a flaming Phoenix symbol. Storm knocks Leech out, and Silver Samurai calls for Nightcrawler to get Magneto and Xorn back to the mansion. X-23 relates her history to Weapon X, saying she might be his daughter, and an unknown figure calls a glowing unknown inside a holding tank "My angel." X-23 continues to ask Weapon X to rejoin Magneto. X-23 takes Weapon X to hunt down Northstar and Aurora, two of Apocalypse's Mutant Elite Force.

Retrieved from "https://heykidscomics.fandom.com/wiki/X-Men:_Age_of_Apocalypse_Vol_1_2?oldid=1470214"
Community content is available under CC-BY-SA unless otherwise noted.