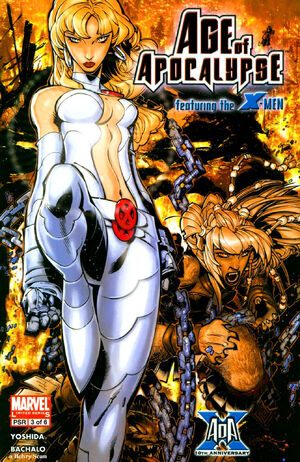 The X-Men engage in a football game, and X-23's given name; Kirika; is revealed. She stops Silver Samurai and Weapon X from violently settling an old score. Cerebro detects the mutant signature of the Guthrie family in Washington, D.C. Cannonball and Amazon are there with their younger brother Icarus (recently discovered as a mutant in the mainstream universe). While the field team (Storm, Silver Samurai, Dazzler, Nightcrawler, Weapon X, and Kirika) fight the Guthries, Xorn attacks Rogue in the Monitor Room. The Guthries leave the battle to help the wounded Amazon, so the X-Men return to the mansion, which has been smashed. They find Paige "Husk" Guthrie, thought to be dead, holding little Charles hostage, blaming them for leaving her to die in the Portland Core (Dazzler's word bubble erroneously states "Seattle Core"). The other Guthries blast through the wall.

Retrieved from "https://heykidscomics.fandom.com/wiki/X-Men:_Age_of_Apocalypse_Vol_1_3?oldid=1470216"
Community content is available under CC-BY-SA unless otherwise noted.