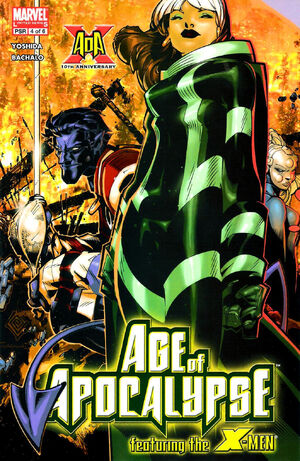 Paige tells the X-Men how she was left to die in the Portland Core with the rest of Generation Next, until the Guthries found her. The X-Men delay, knowing Charles's life is in danger, while Psylocke drops down from above to pull Charles to safety. As the X-Men charge into battle, the roof tears off, and Sunfire and an irate Magneto have arrived. As Amazon grows to attack them, Sunfire fries her. Icarus and Cannonball try to flee, but Magneto wraps them in a metal sphere and crushes it into a torso-sized lump. Rogue stops Quicksilver from killing Husk, telling her that she will rot in a cell for the rest of her life. Paige husks her skin, exposing a stone spike, but Kirika stabs her. With her dying gasps, Paige tells Magneto that Mr. Sinister wants his "deal" honoured. Magneto admits that he didn't stop the bombs; Jean Grey did, and that she's still alive in Sinister's clutches.

Retrieved from "https://heykidscomics.fandom.com/wiki/X-Men:_Age_of_Apocalypse_Vol_1_4?oldid=1470218"
Community content is available under CC-BY-SA unless otherwise noted.